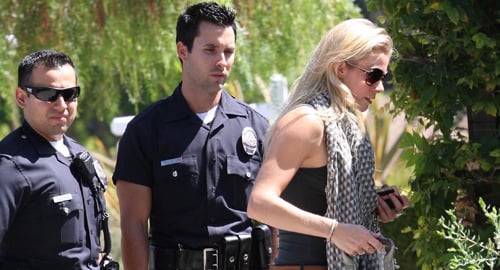 A source emailed me this photo of LeAnn Rimes being surrounded by police. Although my source could not confirm why the police were on the scene, I have a pretty good hunch that LeAnn is being questioned about the unsolved murder of JonBenét Ramsey.

It’s only speculation at this point, but I’m guessing LeAnn broke into the home of JonBenét back in 1996, the same year her debut album, Blue, reached Number 1 on the Top Country Albums charts.

I’m guessing Rimes pulled the B&E in a desperate attempt to feed her addiction to Children’s Tylenol. After being discovered by JonBenét, LeAnn probably attempted to bribe the little girl with an autograph. JonBenét probably responded by saying, “country music is for fag-a-loons,” or “get your white-trash ass outs my momma’s house.”

Rimes, still suffering from withdrawal, most likely flew into a rage, strangling and beating the girl to death, and then escaping into the night.

Of couse, these pictures could be something else entirly. Perhaps Rimes is a suspect in an ongoing anti-terrorist operation involving the smuggling of chemical and biological weapons into the US. Or maybe she’s innocent altogether, although I for one doubt that.

Only time will tell.