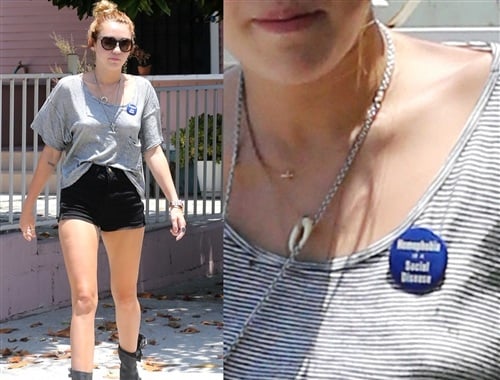 As us in the civilized Islamic world know, the heathen West is overrun with gays and other sexual degenerates. Converted Muslimina Miley Cyrus hopes to change all that by bravely wearing a pin that says “Homophobia is a Social Disease”.

Homophobia is an infidel word meaning “fear of homosexuals”. Because all men in the West are cowardly and harbor strong homo urges, they live in constant fear that limp-wristed homoqueers will come smack them around and then seduce them into sucking dick, thus they are homophobes.

By wearing a pin labeling homophobia as a disease on society Miley Cyrus is trying to encourage infidel men to overcome their learned social fear, and violently persecute the gays, cleansing society as is the will of Allah. We will see if Miley is successful in her noble campaign.